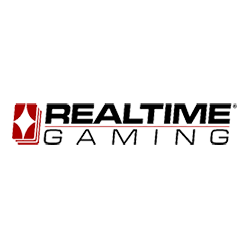 Realtime Gaming is a huge name in the online casino software industry. They are over 70 websites which are powered by the range of applications provided by this company and they also have a growing portfolio of games and other software products which are used by a further group of casino operators. Also known as RTG, Realtime Gaming have a clear niche in the market and it is also about offering their customers freedom. Whilst this sounds fantastic it has landed them in hot water on a number of occasions as they have been involved in deals that haven’t been quite as above board as the company may have hoped. In the last few years they have been repairing their reputation to great effect and look set to have a positive future.

Realtime Gaming was launched in 1999 with their commitment to flexibility and offering their operator clients real freedom with their product. Quite quickly this got them into a good deal of trouble as rogue casino operators noticed the loopholes the company offered and jumped right in. The flexibility of their product made it relatively easy for rogue operators to take hold and this led to the brand being badly reviewed and watchdog groups and websites found complaints about RTG pouring, with non-payment of winnings a leading issue for the group. Their reputation took a knock at this point and this was unfortunately only the first one.

In 2006 Realtime took a different approach to the Unlawful Internet Gaming Enforcement Act (UIGEA) in the USA when compared to most of their competitors. Instead of cutting off all business in the country like most of their rivals, they chose to continue their operations to a point and kept in touch with their US clients, meaning they were under continual vigilant watch by the US authorities.

In 2007 RTG was acquired by a licensee based in Curacao, Hasting International, and this saw the company move in a new direction. By 2009 the company took some big steps for their future and this saw Hastings hiring an intermediary company to work between licensees and players on their RTG platform. This meant that they were given the opportunity to move forward and prove to their potential clients that they could offer a fair and secure gaming environment. In the same year the company also gained certification from Technical Systems Testing which certified them as fair and random and review sites and watchdogs are reporting a better, reputable level of service from this provider.

This isn’t a software company which is necessarily everyone’s first choice because of that slightly suspect reputation but they have worked hard to repair it and as operators are beginning to recognise this it’s only fair that players give them a chance too. The last few years has seen new product launches such as the “Real Series” of slots and they are in a much more secure place in the market than they were at the beginning of their business in the industry. You can explore the casinos which are offering products and software from this provider below.