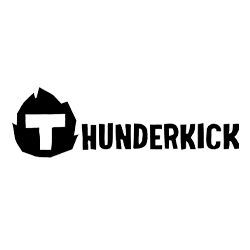 Thunderkick is a young and innovative development company who specialise in online slots. They are a company committed to designing original and interactive slot games and related content for online gaming. The company were formed and are based in Sweden, with their headquarters in Stockholm and they are licensed by the Maltese Gambling Commission. The company is one of the youngest out there but they have a wealth of experience behind them and they have also made a great partnership in teaming up with the NYX Interactive Group, one of Sweden’s largest gaming groups.
Read More

Thunderkick were founded in 2012 and have quickly gained a name for themselves. They have become a recognisable name for their many video slots and they have regularly released new slots to keep interest in their brand and continue the development of quality content in the sector. They are innovative in their approach and the youth of the company means they are willing to be brave and daring with new approaches and net methods regularly tried and tested. The company’s game development is carried out in-house utilising their experienced team and as a small company they don’t have a huge portfolio of games but the ones they have approached are of the highest quality and very finely tuned.

2014 saw a change in direction for the company as they made the decision to partner up with NYX Interactive Group, known as one of the largest Swedish gaming companies there is. By partnering with NYX their games have been given a much larger audience and access to the global market more easily and 2014 also gave the company a chance to sign a brand new set of deals and partnerships with recognisable casino brands.

The slots produced by this company are typified in style by their video game-like appearance and the fact that they use 3D-style graphics, which are uncommon in the online slots world. Their commitment to the newest technologies and ensure all of their games are fully responsive and can be enjoyed on almost any device. There is a retro feel to many of their games but this doesn’t detract from the fact that they are of a real high quality and are gaining in popularity with each new release.

This is a company who are committed to offering something brand new as regularly as they can and their portfolio is expands with bespoke-designed games on a frequent basis. By offering their games across a range of different casinos they are gaining a good reputation and this in turn allows them to push forward new game ideas and innovative and interactive features.

Whilst they are now a subsidiary of NYX it hasn’t reduced their creativity and means their games reach a wider audience and their games can be found at different casinos around the world including Unibet. Take a look at the casinos using this software look below.