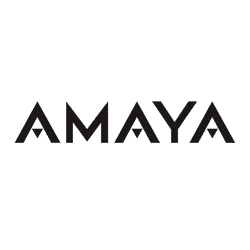 Amaya Gaming is a Canadian company which is headquartered in Montreal and have developed as a leading player in the global casino gaming market. They were founded in 2004 in Quebec and became a publicly limited company in just six years. The have offices based around the world in North America and Europe. Their software offering incudes casino, poker, sportsbook and even land-based video games which they create under the subsidiary company Cadillac Jack. When the company bought PokerStars and Full Tilt Poker in 2014 they furthered their strong profile in the market.
Read More

Amaya has been a software company through and through since it was first launched and they have had a focus on excellence since day one. Initially they focused on the creation of slots with a superhero theme and they launched everything from Superman slots to Wonder Woman, the Green Lantern and the Flash-themed games.

Amaya were also one of the first software companies to offer a ‘live’ casino experience. Alongside Playtech and Evolution Gaming they launched one of the early live casinos and rolled it out across InterCasion, Stan James and BetVictor. They streamed their casino feed from Estonia.

When they became a public limited company in 2010 they made some serious moves in the market and some of their acquisitions shocked many. In 2011 they took over Chartwell Tedchnology and Cryptologic, two companies known for their online game development prowess and in the same year they also acquired the Ongame Poker Network and took over the aforementioned land-based machines company, Cadillac Jack. A licensing deal with Australian software provider Aristocrat was also agreed and in 2013 they picked up the highly useful Diamond Game Enterprises who specialise in building and maintaining both games and games systems.

The biggest moment in the company’s history however was that deal in 2014 that we have already mentioned. They bought out The Rational Group who ran the hugely popular and well-known Full Tilt Poker and PokerStars sites. This purchase has pushed the value and appeal of Amaya to a new level and has positioned them firmly at the top end of the market.

It is pretty clear that Amaya are now leading the market in terms of their offering. It came as a surprise to many that they managed to pick up so many new companies and swallow up recognised brands but in doing so their position in the market could not be stronger. Their poker provision is the leading offering in the market with tens of millions of registered poker players using their various sites and whilst the company has its sights set on America as their target, a lot will depend on whether gambling laws are relaxed and if things change for players in the US. They are very committed to and proud to their poker provision, with their current strapline reading ‘The engine that powers the world’s biggest Poker site’ and with so many acquisition in their short existences so far, we wonder what could be next.