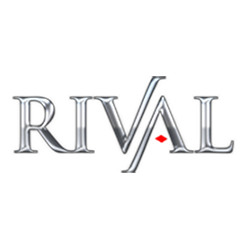 Rival Gaming is a Cyprus-based online gaming company who are considered relative newcomers. The company was founded in 2006 and in the years since this date they have speedily built up a strong reputation and have earned the respect of their competitors as well as casino operators and gamers. They are known as a reputable provider of quality casino software which includes online slots, table games and more.

The games produced by Rival Gaming are available through the industry-leading cross-channel content delivery platform, GTS Edge, which is maintained and controlled through Playtech and it allows their games to be distributed across a much wider network. Rival Gaming also stands out amongst its competitors as casinos which are powered by this software usually accept US players with no issues.

Rival Gaming began life in 2006 and was launched by the Cypriot company Black Chip Limited. Black Chip was a new company in their own right and with the launch of Rival came the quick succession of four brand new casinos: Cocoa, DaVinci’s Gold, Paradise8 and This is Vegas. The company has slowly working to develop a good reputation in the casino software sector although this was marred by issues in 2008 when a deal between Rival and Canadian marketing company, T2 Marketing, didn’t work out as planned and the software company found themselves significantly out of pocket. From then on things seems to get even worse, with 2010 seeing the arrival of several rogue casinos which claimed to be powered by Rival and even managed to take hold of the This is Vegas domain. This significantly damaged the software company’s reputation and saw their brand tarnished and it took some time for the company to distance themselves and prove no involvement in the rogue activity.

Despite the negatives in their past, this company now has successfully licensed both its games and its casino platform to 40+ operators around the world. Their total number of games is not far from surpassing the 150 mark and they are a company on the up.

Of all their developments this company is best known for its series of i-Slots. These interactive multi-reel multi-pay-line slots offer a wide range of great features which make them memorable and popular. They have quality graphics and inbuilt special effects including video clips and even short films. Popular slots in this range include Cosmic Quest, A Switch in Time and Psychedelic Sixties. Their games range also incorporates a number of Roulette variations, Baccarat, Blackjack and other less known table games such as Let It Ride and Red Dog. Specialty games such as scratch cards and keno are also built into their offering.

Rival Gaming utilise their own proprietary Casino Controller software to design and develop their games. Casino operators wanting to access their range of innovative games they can do so using Rival’s Turnkey Casino Suite which is easy to install and setup and also integrates GTS Edge which allows players to enjoy the browser-based instant gameplay.

Check out a range of casinos using this software or offering games from this provider today.